WHO IS ROBIN SAENGER? 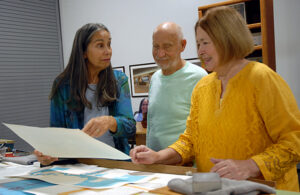 Robin Saenger: Here’s who I am – the long version of my story 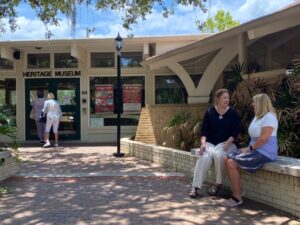 I was born in Illinois but throughout my childhood, we moved quite a bit, sometimes several times a year until we settled in Houston. That was my first taste of having a place that felt like a hometown. I attended the University of North Texas and received my degree in Education with a Bi-lingual Bi-cultural certification and a minor in Spanish. My first “real job” was at an elementary school in Corpus Christi, Texas that was a local, state and national model for what became the “whole school” gifted program – teaching academically gifted students. I was the Bi-lingual Bi-Cultural teacher for the 5th grade but also taught language arts, math, and art.

I loved being a teacher, but I felt I had more to explore in life and after a brief return to Houston, I moved to Tarpon Springs where a friend offered me the opportunity to open an art studio. That was in the mid-80’s and Tarpon was very different than it is today. I enjoyed my career as an artist and that career continues today. At one point, however, I became interested in City government and ran for Commissioner in 2005. That was a difficult time because while I was campaigning, my mom was battling cancer and I flew to Houston every month to spend time with her and support my dad. Mom was too ill to attend my swearing in. She passed a few months later.

Being an elected official was a brand-new world for me, but I vowed to say ‘yes’ to every opportunity I had to learn more about how I could best serve the residents of Tarpon Springs and represent the City.

I served at the County level representing Tarpon Springs on the Homeless Leadership Board, The Tampa Bay Regional Planning Council, and the Metropolitan Planning Organization. Each of those experiences taught me more about how to best represent Tarpon Springs and become a voice and advocate for us and our needs. During my two terms in office, I championed initiatives I thought would make Tarpon better. I introduced and worked toward passing what became our Tree Ordinance and our Public Art Ordinance. I also championed the idea of a Walkable Community by inviting local and national experts to our meeting, so we could learn from them. I kept our ESOL program here for an additional 3 years by finding community support, so we could independently fund it.

During the latter part of my second term, something else came on my radar, and another huge learning curve began. One thing I had observed was that although Pinellas County is rich in services, the numbers for our most challenging issues didn’t seem to decrease. Each year, the numbers for Domestic Violence, Homelessness, Child Abuse, and other societal issues grew. I knew that we were somehow missing something that needed to be addressed. That’s when I learned about trauma and how unaddressed childhood trauma plays out over the course of a lifetime in a person’s physical health, mental health, and eventually in our Community. I learned about a concept called “Trauma-Informed” which uses that understanding to approach problems in a different way. One key idea is to not ask ‘what’s wrong with you?” but rather, “what happened to you?”.

Being trauma-informed means seeking root causes to our challenges rather than putting Band-Aids on how trauma plays out in our world. I thought that if we approached our challenges in this new and unique way we might, over time, transform our city into one that is healthier, more resilient, and connected while also decreasing the things that tear at the fabric of our community. In 2010, I invited a national trauma expert to the Commission to educate us about trauma, and how it affects us. The Commission agreed to work toward making Tarpon Springs a Trauma-Informed Community.

That’s how we became the first Trauma-Informed Community in the nation and how what is now known as Peace4Tarpon began. We have partnerships throughout the County with Mental Health providers, schools from early learning through college, and many other alliances, but what is perhaps our most fruitful one is with our residents. They connect with us and become leaders in our work. They are the solution to generational trauma in our City.

Now we are known nationally and folks from around the country have visited to learn from us. I representTarpon Springs and Peace4Tarpon throughout Florida as well as nationally. I have spoken at many conferences, given keynote addresses, and now I am the SME (subject matter expert) in Trauma Informed Care/Communities for the Center for Public Safety Innovation at St. Petersburg College and give trainings around the state.

Peace4Tarpon is now in its 11th year and is not only getting more traction but is a model for other communities here in Florida and around the nation. A few of these follow our model such as Peace4Gainesville, Peace4 The Big Bend, Peace4 Crawford County, Pa. and Peace4 Manasota. Many others are creating their own models, but we are the ones who provided the inspiration and have shown what is possible to create positive change in a community.